1. Communiqué (Originalquelle: https://anfenglishmobile.com/news/banners-and-posters-campaign-continues-throughout-swiss-cities-47788 & https://anfturkce.com/avrupa/Isvicre-de-pankart-eylemleri-148038)
Banners and posters campaign continues throughout Swiss cities.
Protests were held in many cities in Switzerland as part of the banners and posters campaign launched to protest the aggravated isolation of Kurdish people’s leader Abdullah Öcalan and demand his freedom.

As part of the initiative „End Isolation, Fascism, Occupation; Time for Freedom“, activists continue the posters and banners actions in Swiss cities.
The hanging of posters and banners led by Kurdish women and youth took place in the cities of Basel and Bern on Friday.

In Bern, Mizgin Women’s Council activists put posters on the walls of the city’s busy streets, and on the highways demanding freedom for Kurdish people’s leader Abdullah Öcalan.
The actions will continue throughout the week under the leadership of women’s and youth assemblies in many Swiss cities. 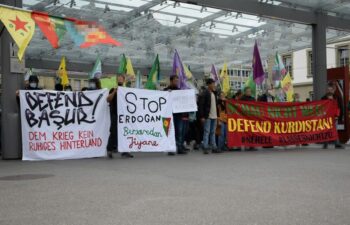 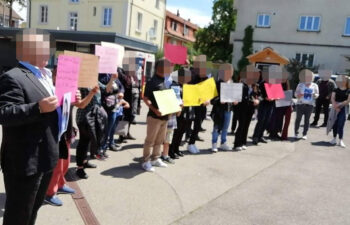 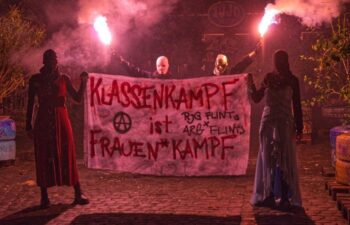